To Curse or Not to Curse

Posted by Avily Jerome on June 30, 2016 in Author's Journey, Critical Views, Our Faith 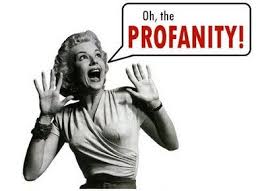 The topic of using profanity in novels came up for discussion in a group I’m part of on Facebook. This is a topic that is diverse and can be very divisive, especially in Christian writing circles. People have strongly-held beliefs about language, on both extremes.

There are those who say “words are just words, they only have the meaning we ascribe to them, they are not inherently good or evil, but are only what we make them.”

Then there are those who adhere fully to the spirit of Ephesians 4:29, “Do not let any unwholesome talk come out of your mouths, but only what is helpful for building others up according to their needs, that it may benefit those who listen,” and consider even euphemisms like “gosh” and “dang” to be equivalent to taking God’s name in vain and literally damning someone.

Most people fall somewhere in between, some leaning a little more to one side than the other.

And all the personal beliefs about what a person can and should say themselves get muddled when it comes to writing fiction. What someone does in their personal life may not be the same as the things their characters do in a story. I don’t use bad language (okay, sometimes I do, if I’m ranting to my husband or in certain other contexts), but I don’t scatter my general vocabulary with colorful language, and I don’t let my kids say inappropriate things, to the point where my kids think the “S-word” is “shut-up” or “stupid.” But my characters aren’t me. They don’t always have the same beliefs or standards, and they don’t set the example for my family. And sometimes they do things that I don’t do.
So what’s a writer to do?

Should the book gloss over language, or be true to the character? Is it okay in dialogue if it’s the “bad guy” who is saying it? Should it be referenced as “someone cursing” or “someone swearing” or should it be left out completely?

Much like any topic relating to standards of Christian behavior, the Bible has some standards and guidelines that can be applied, but doesn’t specifically outline what the exact dos and don’ts are, or how much is too much, or where to draw the line.

As with consuming alcohol, watching certain movies, going dancing, and countless other actions, acceptable language according the standards of traditional “Christian” behavior struggles to find balance with personal freedom and grace.

In the discussion, the two sides that came to the forefront were:

And, as with most things, it comes down to a personal choice.

Personally, I feel that it is somewhat incongruous and possibly even hypocritical to whitewash your story of all language, while retaining other questionable activities.

Suppose, for example, you have a suspense story. Your antagonist “bad guy” is trying to murder your heroine and your heroine and hero have to uncover whatever it is the antagonist is trying to keep hidden without dying. Your antagonist, being a bad guy, spends time in bars, picking up women, and plotting murder (plus running drugs or whatever bad thing the hero and heroine are trying to uncover). In the Christian market, you can portray all these things, detailing what a dastardly character he is, but if he says “$#*!” you’ve crossed the line.

There is an argument for the idea that seeing it in written out imprints it on your mind and you can’t unsee it. There is an element of truth to that, but I don’t think it’s the only thing to consider, and the same could be true of graphic violence or sensuality, both of which are present to some extent even in Christian novels.

There’s also the notion that including it is tantamount to endorsing it, but again, I think that’s a double-standard when there are other “sinful” behaviors being described.

The line becomes even fuzzier, however, when a main character or “good guy” is the one doing the “bad” things, and not just the “bad guy.” I’m always reminded of Grace Livingston Hill books when I think of this. Don’t get me wrong—I’m in no way coming down on GLH, and I really loved her books when I was younger—but her main characters, even pre-salvation, were still “good” people, who didn’t wear nail polish or make-up or enjoy the night life or any of those other “worldly” things, and always knew there was something else out there with meaning, and were just waiting to find out it was really Jesus they’ve been needing and wanting all along. GLH is an icon of Christian historical romance, beloved and read by millions. And yet her characters are pretty much all the same one-dimensional, flat people. Which, in some ways, is exactly what the Christian market wants.

In the supernatural horror story I recently finished, my main character not only doesn’t get saved, she also uses some colorful language. She’s a cop, she’s been through a trauma, and it’s part of who she is, as is the fact that she has no qualms about premarital sex. Her character would not even make sense if she said, “By gum, these otherworldly monsters sure are a handful. Well, poo, I guess I should stop them from their killings and reign of terror.”

Could I have made her a good, upright citizen who never says bad things? Sure. But then it would have been a different story. And someone else already wrote that story.

The real trouble, of course, is that readers have certain expectations when they pick up a book. If you open “Fifty Shades of Grey” and are shocked that there’s sex in there, that’s on you. But if you pick up a Grace Livingston Hill novel and find sex, you’re going to have a lot of trouble getting through it.

In the Christian market, readers have certain expectations, and those expectations include refraining from any language that might be deemed offensive.

And so those of us who write from a Christian worldview but like to push boundaries end up in a weird no-man’s-land, much the same as the one in which Christian spec-fic writers find themselves in. Too “Christian” for the secular market, and too “worldly” for the Christian market.

It might help if we had a rating system for books as we do with movies, but since we don’t, we have to do the best with what we have.

And so, as with so many other things, in writing and in life, it comes down to a personal choice. One piece of writing advice that holds true over many different aspects of writing, is “follow the story.” The story you write may be fine without any profanity (or sex, or violence, or whatever). My Legends Unleashed story is “clean,” and that works for the story. But my supernatural horror doesn’t work without violence and some language. That’s not the story it is, and if I tried to make it so, it would dilute the story and weaken it.

Of course, we all have to make the choices about what we read and write, and how that reflects our consciences and integrity. I know what I’m comfortable with and where I land on most things (although that line changes and evolves the more I write), and I know what sorts of things are over the line for me. And my line is going to be different from someone else’s, even in the same genre, with the same religious and personal convictions, and in the same publishing circles.

So, too, you must decide what you feel comfortable with, what doesn’t strain your conscience, what convicts you and uplifts you, and what serves a larger purpose.

In the comments on the discussion that started this line of thinking, people linked several blog posts on the subject. They all offer good insights and food for thought, so if this is a subject you’re giving thought to or struggling with, I encourage you to read these other perspectives.

A Character in my faith-based novel just dropped an ‘f-bomb.’ Now what?

It’s Not The Words, But What’s Behind The Words That Matters

13 comments on “To Curse or Not to Curse”