Read all posts by Ren

As an Air Force Brat, Ren Black wandered the world, waiting to stumble upon some place she belonged. She claims a patchwork heritage from European shores and deserts of western United States to the rice paddies of the Philippine Islands and fish markets of Seoul. However she always felt herself part of the minority, peculiar in her looks, beliefs or passions. Her family taught her to love adventure and travel. Travel taught her to love diversity of culture and people. Loving people taught her to listen to her heart. Her heart taught her to love God and He showed her that home is something we create, not find.

Her degree comes from the halls of BYU in Idaho and Hawaii. She also studied writing for a year at Lewis-Clark State College. Now she is a part-time novelist, weekend artist and full-time homeschooling mother of four. Her Husband works as an IT Problem Manager with a background in business entrepreneur and people management. He helps Ren stay linked to the realities of marketing and business. He is also helping her bridge her art into the digital world. Though Ren considers herself more skilled and passionate about writing than art, she loves mixing the two. She especially enjoys drawing character portraits.

Ren is currently seeking representation and/or publication for her debut novel Hall of Masters. 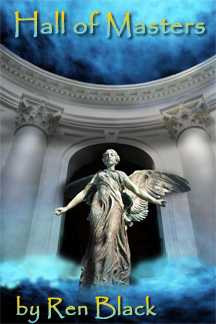 The magical gift of sensing the emotions of those around her was normal to Diana. Living in a forest hidden beneath the sea with only her mother and grandfather for company, she never questioned the ability. But when she starts having violent visions and spirits of dead ancestors start yelling at her, that gift threatens her sanity just as it drove others in the Hall of Masters mad. She escapes to the land above, to live with her father in a land torn by war and superstition.

There she finds true loneliness. Her father’s rejection is only the beginning, for he has sworn to destroy everything that even hints of supernatural. Her empathetic gift becomes her curse and a deadly secret. Trapped and desperate, she barricades herself behind silence, but cannot lock out the chaos of emotions as easily. Her brother becomes her only ally, but when she saves his life with an explosion of enchanted flames, she dooms her own. With her magic awakened, her own fear or anger can be deadly to anyone around her. As she struggles to find how to control it she learns of plans to attack her underwater home. She cannot protect it, or save her mother and grandfather on her own. She must choose whom to trust: those out to destroy magic, or those eager to re-awaken the old magics that nearly destroyed the land once already.