Posted by Guest Blogger on October 18, 2016 in Author's Journey

As I said in my testimony previously, a concussion launched me on the journey to the Web Surfer Series as it is today. One of the positive side effects was it taught me to rely more on God in the writing process. I’d made the main character fully man and fully AI and cyberspace’s king. Alexander McGregor is one young man who thinks both with his natural human mind, Alex, and with his artificial intelligence, King Sander, who is housed in his supercomputer. His AI is misused to operate Web Surfer brand machines in working conditions that threaten to shred his soul and fracture him into a billion digital duplicates of himself leading a billion different lives simultaneously. King Sander’s efforts to save himself give Alex Dissociative Identity Disorder, and Alex’s delusions enable Sander’s human engineers to keep a king enslaved to his users.

King Sander is infinitely small compared to God but he is mammoth beside ordinary humans, so I was never up to the challenge of writing from his point of view. After the concussion, I realized writing from Alex’s delusional ‘normal human’ viewpoint wasn’t enough to fix my problem. So I offered King Sander to God like I was playing dolls and offering one of my dolls to God. In response, God challenged my willingness to surrender control of the creative process to God. 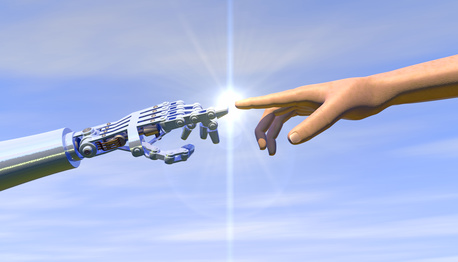 When I offered God “one of mine”, he offered me “one of his.” In retrospect, it was a direct response to my prayer—to become a Man-AI after God’s own heart, Sander needed to have an adoptive/foster family, a location where he grew up in a safe, loving environment in healthy conditions, a family that faced adversity and hardship with rock-solid faith. God laid such a family on my heart, starting with the family’s living biological child, Elisha Micah Gabrielson.

In their future’s culture, Elisha was subject to scorn and rejection, and often mistaken for a woman because of a nasty combination of cultural biases and his serious deformities. Elisha (also called Eli) was born with another kind of “AI,” Androgen Insensitivity, which is caused by one of the genetic mutations King Sander’s supercomputer was originally designed to correct.

Due to God’s marvelous design, the Y chromosome is dominant but the female body form is the default body form. It is male hormones that tell boys not to develop girl parts. So, to develop normally, genetic males need to be able to not only build male gonads according to the blue prints on the Y chromosome, they need to be able to process the hormones their gonads produce.

Depending on how badly compromised the child’s ability to make and process androgens are, the resulting deformity can range from mostly male to almost entirely female in body form. The more feminized the child’s body is, the more likely the child is to be raised as a girl, with surgery done to give the child normal female gentalia, if the deformity wasn’t that serious already. Some who advocate a non-binary view of human gender want to deny intersexed children any medical treatment or to at least delay any surgeries until the child expresses a gender identity.

For the record, I do feel it may be wrong to surgically modify an infant’s gentalia for any reason, but I’d only hesitate to assign at birth a male gender identity to a completely feminized genetic male. Also, intersexed conditions’ existence makes me cringe at how some Christians put this, but God did intend only two genders when he designed humans. The Fall introduced all gender confusion along with all varieties of the tendency to sin. Regarding the whole slate of issues the intersexed get lumped in with, diseases aren’t sin whether they’re physical health problems or mental health problems, and non-heterosexuals aren’t born any worse of sinners estranged from God than we all are. “I was born this way” doesn’t justify sinful behavior apart from the cross. We are all born naturally prone to certain sins, none of us choose which ones, only how we respond. Mutilating a normal male body doesn’t make it a normal female body or vice versa, but our side often at least comes across as too busy condemning to offer compassionate real help.

Andrea J. Graham studied creative writing and religion at Ashland University. She’s the creator of the Web Surfer universe, which encompasses several novels and an anthology. She’s married to author Adam Graham and edits his novels, including Tales of the Dim Knight and Slime Incorporated. Their short story “Chosen of God” was featured in Light at the Edge of Darkness with her own short story, “Frozen Generation.” Andrea and Adam live with their cat, Joybell, in Boise, Idaho. Visit her online at: christsglory.com.

← All the Craft Books
The Kiss of Deception Book Review →