Posted by Kristen Stieffel on September 19, 2017 in Author's Journey

What can I tell you NAF followers about Alara’s Call that I haven’t already? Some of you have been with me on this journey since the days of the Marcher Lord Select contest. When we announced the release date for Alara’s Call, Becky Minor—NAF alumn and founder of the Realm Makers conference—asked me if that was my Marcher Lord Select contest entry. 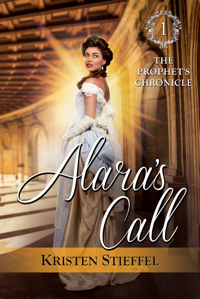 Alara’s Call is available for preorder now at Amazon or the publisher website, which has links to other stores.

Yes, it is. Let’s talk about that contest, shall we? For those who weren’t around for the inception of NAF, the Marcher Lord Select contest was run by Jeff Gerke in the early days of his publishing company (now under new ownership and called Enclave Publishing). Jeff had 36 manuscripts and one publishing slot. He likened the contest to American Idol for books. The winner would get that publishing slot. The whole contest took place on the Anomaly forum that was an offshoot of Jeff’s website.

In Round 1, we presented our title and synopses. Everything was posted without author names attached. Authors could appeal to their fan base and say, “Go to the forum and vote for my book titled whatever.” In fact, we were encouraged to do so, since that would show what kind of platform we had. But anyone who didn’t know you would have only the title and synopsis to go on. Based on that—and I confess my original title was awful—my book did not advance.

Once the votes were in, I posted on the forum, identifying which story was mine and asking for feedback. I wanted to know what I had done wrong, because that synopsis was the same one I was sending to agents and editors.

Robynn Tolbert thought my request was courageous, and ever since then she’s been calling me Lioness. Truth is, I’m a cowardly lioness—but also desperately eager to improve my craft. So I felt the fear and asked anyway.

I got lots of good input on the synopsis, but the best advice came from the person who said Alara was an awesome name and should be in the title.

In Round 2, the remaining 18 entrants shared their first 500 words. I read all of them and gave feedback, and continued to do so in the following rounds as we read longer excerpts of fewer manuscripts. At some point I realized that I enjoyed marking up other people’s manuscripts as much as I enjoyed working on my own.

At the time, I was working in the newsroom, doing a little bit of writing and copyediting and a lot of page design. I wanted to do more copyediting, but there were three editors above me, and only one of them delegated more work to me. The economy had tanked. First management cut overtime. Then they reduced our base pay. Then they cut our hours. I started freelancing as a copyeditor to make up for the lost income.

On the forum we all developed a camaraderie in spite of—maybe because of—the competition and critiques. When Keven Newsome launched New Authors Fellowship in January of 2010, most of the participants were from the Marcher Lord contest. Many have since been published. Others stepped away from NAF to spend more time on their personal projects. Soon I’ll join the alumni ranks and someone else will take my place. But I’m delighted that the version of Alara’s story that’s releasing next week is so much better than the one that got voted off the island in the first round.

The Anomaly forum and the contest forged relationships that extend into the NAF and Realm Makers communities, and I am thrilled to bits to be part of it all. It isn’t a stretch to say that without the Marcher Lord Select contest, we wouldn’t be here. Because that’s where we met.

While I was riding out Hurricane Irma, Alara was on tour. Check out all the places she’s been:

← A Day of Prayer
Eight Ways to Handle Stress →