Posted by Britta Valentine on October 5, 2016 in Critical Views

Vhalla Yarl is just a simple apprentice at the castle library. Her dreams are pretty simple too. She’d like to become the master of the library after her mentor retires. Her life gets thrown for a loop when the crown prince is injured and the library is called upon to find any resources that could be used to find a cure.

Through magical powers she doesn’t know she possesses, Vhalla is able to save Prince Aldrik. As it turns out, she’s a type of magic user known as a Windwalker, but Windwalkers were supposed to have been extinct for a hundred years. In a world which regards sorcerers as secretive and dangerous, what can she do with her newfound powers?

Vhalla is torn as she’s ushered into a new world full of powerful sorcerors, elemental magic, and secret enemies. Despite the uncertainty of her current situation and fear of what the future might hold for her, she finds a friend and mentor in Prince Aldrick, who is also a magic user.

2.) What I loved about this story.

The story was exciting. The pacing was great and had me turning page after page. I pretty much finished it in two settings. The characters were decently complex and the plot was intriguing enough to keep me interested.

The mystery behind the magical bond forged between Vhalla and Aldrick after the healing was a neat twist, which I’d like to learn more about in the next book. The elemental aspect to the magic system in Kova’s world was pretty cool too. Someone said if you liked Avatar: The Last Airbender you’d probably like this series. I’d say I agree with that.

Also, if you like a little bit of romance mixed into your fantasy novels then this book is probably for you too.

Despite the pacing throughout the rest of the book, I thought the first few pages started out a bit slow. I also thought that the character describing the color of her own eyes jarred me out of the story a bit.

I did feel like the romance aspect of the story was a little rushed. I think the feelings between Vhalla and Aldrick could have grown a little more naturally. I did enjoy their banter back and forth though.

There were a couple of innuendos in the book that could have been left out, and there was one character who may have been gay. I wasn’t sure if this was the author’s intention, and it’s probably something that will be made clearer in the next book of the series.

With all of that said, I really enjoyed this book and will continue reading this series. It was an easy, fast paced read, and I’m eager to see what happens in book two.

My next book review will be:

The Kiss of Deception

She flees on her wedding day.

She steals ancient documents from the Chancellor’s secret collection.

She is pursued by bounty hunters sent by her own father.

She is Princess Lia, seventeen, First Daughter of the House of Morrighan.

The Kingdom of Morrighan is steeped in tradition and the stories of a bygone world, but some traditions Lia can’t abide. Like having to marry someone she’s never met to secure a political alliance.

Fed up and ready for a new life, Lia escapes to a distant village on the morning of her wedding. She settles in among the common folk, intrigued when two mysterious and handsome strangers arrive―and unaware that one is the jilted prince and the other an assassin sent to kill her. Deceptions swirl and Lia finds herself on the brink of unlocking perilous secrets―secrets that may unravel her world―even as she feels herself falling in love.

I actually became interested in reading this series after seeing the covers of the other two books, so I guess I’m judging by the cover. 😉 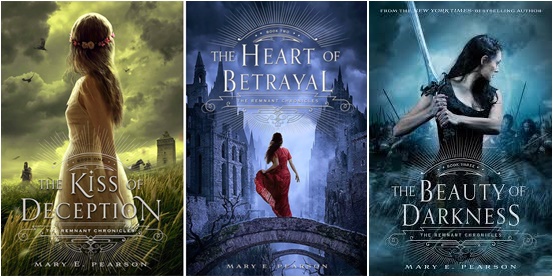 Have a great rest of the week! What are you reading?

saved by grace, writer of young adult fiction, and drinker of copious amounts of coffee