Review: Jack and the Cuckoo-Clock Heart

Posted by Kristen Stieffel on September 30, 2016 in Critical Views

The other day at the Realm Makers Consortium, Lori Ann Weldon posted a link to a film she called “the most bazaar, trippy, and weird as WACK piece of art I have ever experienced.”

She wasn’t overstating the matter. Jack and the Cuckoo-Clock Heart is an animated Steampunk-fantasy drama that is incredibly beautiful and strange, like a collaboration between Tim Burton and Hieronymus Bosch.

It is a gorgeous film to look at, but it’s hampered by, among other things, a nihilist worldview. Reviewer Roger Moore went so far as to call it “heartless.” Despite the pun, I’m inclined to agree. 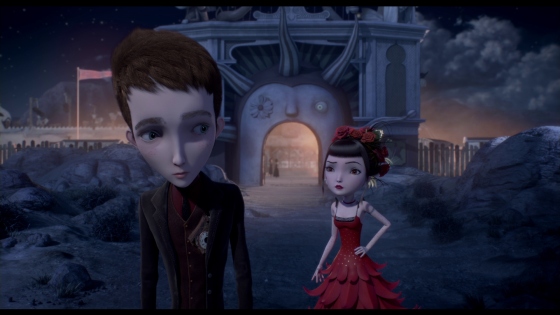 Don’t let the fact that this is an animated film fool you. It has a dark tone, and although there are a few moments of levity, it is for the most part straight-up drama. I would go so far as to say tragedy.

The premise of the story is that Jack, having been born on the coldest day on earth—a day on which dead birds fall frozen from the sky—has a heart of ice. The midwife, Madeline, replaces his heart with a tiny cuckoo clock. Jack’s birth mother abandons him to Madeline’s care.

When Jack turns 10, Madeline cautions him that because of his delicate mechanical heart, he must not lose his temper or fall in love, as this would cause his heart to explode.

Of course Jack immediately meets Acasia and falls in love with her.

The fundamental flaw at the center of this film, then, is its wrong-headed view of love. Like almost every blinking animated film ever, Jack and the Cuckoo-Clock Heart mistakes infatuation for love.

The great love of the story—which the filmmakers give scant attention—is the love Madeline shows in raising Jack as her own.

As for Jack, his journey as a hero is purely superficial. At the age of 14 he jaunts across Europe in search of Acacia, whom he finds singing in a circus populated by refugees from one of Bosch’s paintings. Yet Jack doesn’t actually grow or change in the course of this adventure, and neither does she.

The character motivations, where they are present at all, seem completely arbitrary. Characters do or say things randomly according to whatever suits the mood of the filmmakers at any given moment. Acacia says she loves Jack, but when he gets into a fight with schoolyard bully Joe, she turns on him. Madeline goes to great lengths to save the life of newborn Jack, but another scene hints that she may be an abortionist.

The entire plot is episodic, which is not a bad thing in itself, but an episodic plot needs a strong theme and through-line to tie all the pieces together, and the Jack-Acacia infatuation isn’t strong enough to do that.

A great deal of the discontinuity this structure produces can probably be attributed to the fact that the film is based on the book The Boy with the Cuckoo-Clock Heart and the related concept album La Mécanique du Cœur by the band Dionysos. The book was written by Dionysos frontman Mathias Malzieu. Some of the songs are good, but some suffer in translation.

As RJ Conte commented on Lori Ann’s post, the movie “Totally was an excuse for that band to promote their songs.” Maybe not totally, but it seems that some events in the movie are there only because there was a song to include. Notable among these is something I can only interpret as a dream sequence involving Jack the Ripper. It has nothing to do with the story, and the instant another character enters the scene, the Ripper vanishes as if he had never been there.

I warned you there were spoilers, sweetie.

The movie’s nihilist worldview is nowhere more evident that at the ending, in which Jack returns home to find that Madeline has died in his absence—apparently of a broken heart. As he visits her grave, Acacia arrives. They kiss, and he dies. The. End.

All the struggles of the hero are for naught.

The theme appears to be that love is so painful it should be avoided. But where I feel the story most misses its mark is that neither Madeline’s death nor Jack’s is meaningful. I don’t expect every ending to be happy, but if the ending is going to be a sad one, let it have meaning. In this story, love leads to death.

In my worldview, love leads to life.

Jack and the Cuckoo-Clock Heart at Rotten Tomatoes

Jack and the Cuckoo-Clock Heart at Internet Movie Database

3 comments on “Review: Jack and the Cuckoo-Clock Heart”