My kids, ages two and one, are really awesome. No, I mean REALLY awesome. They both slept through the night beginning at four weeks. They’re generally happy and easily self-entertained. They love to read. They eat what I give them with little complaint. They are angels at the store, and all the grandmotherly shoppers call them dolls and tell me wistfully that I have my hands full.

How has this happened? Well, I don’t know. Granted, I do have some seriously strong preferences about parenting, most of which are based on Pamela Druckerman’s excellent Bringing Up Bébé. I definitely think I’m seeing fruit from applying French parenting principles. And it’s easy to feel proud when what you’re doing is working. So I often wonder: are my kids awesome because God just made them that way no matter what I do? Or is it that my parenting strategy works? In other words, are my kids great because God is awesome, or because I am?

(Well, when I phrase it THAT way, the answer is pretty obvious. But, uh, bear with me. I have a larger point.)

I see in the above predicament a parallel to being a writer on social media. I’m constantly analyzing my Facebook posts, tweets, and blog posts: what made that one, and not this one, popular? Was it a matter of timing? Wit? Luck?

Okay, please keep bearing with me, but before I expand on being a writer online, I’m going to bring in one more element. That element is Jacob’s sheep-breeding trick from Genesis 30. 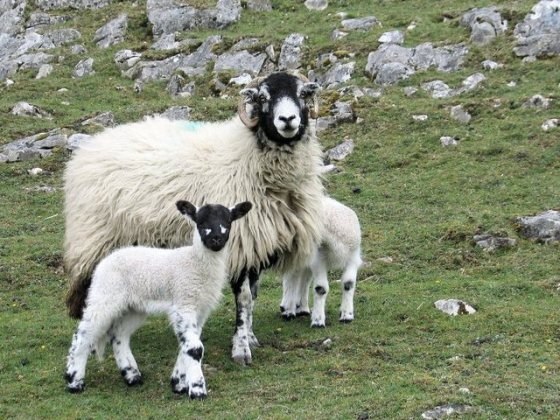 Here’s the story: after Jacob made a deal with his father-in-law Laban that he would keep all the striped or spotted livestock for himself, Laban essentially stole all the livestock of that description from Jacob’s flocks so that it would be less likely Jacob would get to keep any. Here’s what Jacob did in response, from verses 37-39:

Jacob then uses his sticks only when the strongest livestock are breeding so that the sheep and goats that belong to him are the best of the brood.

I remember being frustrated with this story during my years of hostile agnosticism. Was the Bible really endorsing a practice this unscientific as a legitimate way to muck with genetics? What was the point?

And what is the point? We can be tempted to skim over this “embarrassing” section to get to the stuff that makes sense again. But that flies in the face of some of the best reading advice I’ve ever gotten. “When something about a text bothers you,” one of my professors told me, “camp out there until you’ve resolved it. That’s where the best essays are.”

So I camp out on Jacob’s sticks. My study Bible tells me that “the text should not be understood to imply any causal relationship between the sticks and the newborn animals” (ESV Study Bible [Wheaton, IL: Crossway], 103). So the point is not the sticks. The point, I think, is God’s faithfulness to Jacob. He had promised Jacob in Genesis 29:15, “Behold, I am with you and will keep you wherever you go,” and He was fulfilling that promise. Jacob could have carved his sticks, or designated a lucky breeding ground, or done a “spotted sheep dance” while yelling “hoogledy-boogledy,” and all of it would have been just as effective, because God had determined to bless Jacob and that’s what He was going to do. Sticks or no sticks.

Jacob’s efforts, in a sense, were futile, but God made him prosperous anyway. And the more amazing thing is that it’s not just Jacob’s silly stick strategy that God blessed him in spite of—there was also active opposition from his boss Laban, who cheated him multiple times. If God decides to bless you, nothing can stand in His way.

So it could really be that my child-rearing tactics are effective. Or I might think that my tweet got liked because I connected to the right people or did it at the right time of day (just before lunch, but not TOO before lunch, on a Tuesday!). But for all I know, I might be using Jacob’s sticks. Ultimately, whether I’ve picked a strategy that works or one as seemingly crazy as Jacob’s sticks, it’s God’s desire to bless me that actually blesses me. “Many are the plans in the mind of a man [sticks, baby-raising, social media], but it is the purpose of the LORD that will stand” (Proverbs 19:21).

No matter whether my next Facebook post gets liked or not, I know God’s purposes for me are good. I can always be sure that His posture toward me is one of blessing, no matter my perceived successes or failures, because Christ won God’s favor for me. So I have nothing to fear—and everything to thank Him for.

Shannon Stewart is a high school English teacher with an MA in English Literature still curled in its mail tube in her closet. The real prize, her love for British fiction, is on exuberant display in her classes each week. So far, she’s completed several of her life goals: naming her two children after fictional characters, getting her husband to play The Legend of Zelda: Ocarina of Time, and completing her first WIP, the fantasy Callia-Born, this year.