Screwtape Sounds Off on “Christian Fiction”

Posted by Guest Blogger on January 24, 2015 in Christian SpecFic

By guest blogger John Wheeler
(With apologies—up to a point—to C.S. Lewis)

It is always heartwarming to read your occasional reports on how that Human author, Lewis, posthumously transmits the disinformation about us which we so subtly put into his hands. Even more heartwarming—down to the very Pit of the Lowerarchy—is that Lewis’ fellow Humans believe so much of that disinformation. Most Humans still don’t realize that we will speak a thousand truths to sell one lie. Imagine it, Wormwood: your lamentable failure to snare an English “patient” (snerk) during what they call World War II supposedly leading you to be absorbed by me, as if you were a smear of caviar on a cracker! And our alleged belief that “to be” means “to be in competition!” Oh, what laughter such statements bring when I recite them around the office lava heater. Oh, how much they lighten our work in Cubicle Hell. 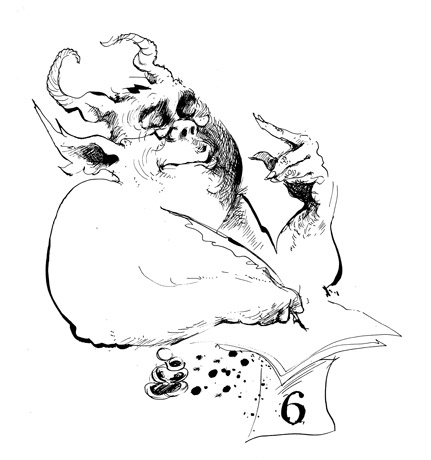 Illustration © 1979 by Papas, from The Screwtape Letters; Special Illustrated Edition

No, my dear “nephew” (chuckle), not even you were ever that stupid. We know all too well that “to be” means “to be an individual,” it can also mean “to be organized in a group,” and that it can also mean, most regrettably, “to be in cooperation” and also “to be a unity of parts.” We have the Ineffable Presence staring us in the face from afar as absolute and undeniable proof of all of the above. We simply prefer “to be in competition,” for reasons which Our Father Below and all his minions hold as a matter of first principles. And wasting field personnel by absorbing them after failure, without letting them learn from their mistakes, is not something our Almighty Enemy would allow even were we inclined to promote such gross inefficiency.

And now for the main point of your letter. You need not fear—at least in this age of the world—that a certain less-than-minor Human writer, Rakkav, will ever have the outreach Lewis had, or even an infinitesimal amount of it. But I will give Rakkav this: he is as pointed an ENFP (look up the term in your manual on models of Human cognition, if need be) as we have ever run across. Get past his peculiar use of systemic logic and his useful (to us) need to be liked, and it’s not at all hard to know where he stands. And such authenticity is never good for our cause.

You brought to my attention last time two other Human writers, Jerome and Steiffel, who wrote coupled discussions on that strange phenomenon called “Christian fiction,” and especially on the subset “Christian speculative fiction.” You noted this time that Rakkav wrote a long essay—even for him—in response to the other two, and after reading it I am rather alarmed. It is a good thing Rakkav’s outreach is so limited because he virtually takes some words right out of my mouth, even if he then perverts them according to the Enemy’s perspective.

The most alarming thing about Rakkav’s perspective is that he cares so little about the role Mammon plays in the whole question of what “Christian fiction” is or should be. His focus is very much like something I said when I famously proposed a toast at the Tempters’ Training College, which point we allowed Lewis to receive verbatim. With regard to “democracy,” I warned, Humans must never “be allowed to raise Aristotle’s question: whether ‘democratic behavior’ means the behavior that democracies like or the behavior that will preserve a democracy. For if they did, it could hardly fail to occur to them that these need not be the same.” Yes, I also spoke then of the destruction of individuality by the group. But Lewis did not foresee, because we did not allow him to foresee, that rampant individuality is as useful to us and as destructive to Humans as is rampant groupthink, and not just in the way a ram might lead a whole flock of sheep to the destruction of all. Our specific disinformation about the text of my toast involved this point. But Rakkav has inferred—thanks to that often-troublesome Human named Jung—what even Lewis saw less clearly: our real aim is to keep Humans unconscious, whether as individuals or as groups, and we change our emphasis according to the need of the hour.

Meanwhile, Rakkav’s peculiar turn of mind allows him to see something else we see: Aristotle’s question applies not just to all other forms of government, but to all human institutions and activities whatever, including creative writing. So for Rakkav, quite simply, is “Christian fiction” what Christians like to write and read, or what will glorify the Enemy and edify Christians? He is so used to leaving Mammon out of his calculations entirely that for him, the questions Jerome and Steiffel raise about “Christian speculative fiction” would be off his personal radar screen, were it not for other metaphysical concerns he has.

Now we have kept Rakkav himself boxing the air for most of his life regarding the use of his own capacity for speculative imagination. On that subject, his greatest fear is trying to please both us and the Enemy and in the end pleasing neither. But then, his essay discusses the matter and I need not belabor that point or his other points.

Clearly, you must keep me fully informed of further developments. If Rakkav ever comes to terms—or to the Enemy’s terms rather—with his own speculative imagination, then one of the greatest potential holds we have on him will be lost. Be careful, Wormwood. The lessons you have learned from your mistakes with others who shared his drive for change must be kept clearly in mind with him.

John Wheeler (who writes on the Web as Johanan Rakkav) is a very busy Ne’fi (ENFP on the Myers-Briggs grid). Besides being a consultant in Christian apologetics, he is the editor and co-publisher of the book THE MUSIC OF THE BIBLE REVEALED by the late Suzanne Haïk-Vantoura (rakkav.com/biblemusic), a singer-songwriter who plays the piano, synthesizer, Celtic harp and ten-stringed Hebrew lyre (kinnor), a lifelong lover of the natural sciences (especially astronomy) and of speculative fiction, an enthusiast of personality type models, and (writing with E.V. Medina as Jack Shepherd) the co-author of the medieval fantasy/allegorical SF book REALMWALKERS (tiaera.blogspot.com). His fictional Metacosmos is now featured at undyingsinger.wordpress.com and rakkav.blogspot.com, as well as at the page TALES OF THE UNDYING SINGER on Facebook.

← Accountability for writers needn’t be this complicated
I’m Alive! →

12 comments on “Screwtape Sounds Off on “Christian Fiction””