Posted by Avily Jerome on October 30, 2014 in Author's Journey

NaNoWriMo (National Novel Writing Month) starts in two days. The goal is to write a 50,000-word novel in a month. I’ve completed it in the past, and I’ve come close to completing it, and I’ve accomplished my own goals (one year I wrote a middle-grade book one year that wasn’t 50K words, but I finished it, which was my goal) in years past. Last year I planned to do it, but about a week in I gave up. There was just so much else happening last year, so many commitments I already had, so much else that I had to cram into that month that I just couldn’t do it. And that’s okay, too. I didn’t beat myself up for “failing,” I just realized last year was not my year. Which makes this year that much more important to me.

I have a bit more editing I need to do on the current book before then, but I’m getting very excited to start. I’ve spent so many hours on this novel, editing and re-editing and revising and changing and turning it upside-down, shaking it out, and rewriting again. I love this story, but I admit I’ve gotten to the stage more than once where I’m ready to give up on it.

But that’s exactly why I’m so eager for NaNoWriMo. It’s hard sometimes to get out of a specific rut and do something entirely different, but it’s essential to the creative process. When you’re so involved in one particular thing, it’s easy to get bogged down, to get lost in the details, to forget why doing this is something you love.

That’s why I love NaNo. I like a challenge, as anyone who knows me knows, so trying to beat the clock is fun, but more than that, I really love that it totally ignores perfection and details. It’s all about the creation of something new. You don’t have time to worry about revising the plot because you’re so busy just getting the words out. Revising comes later, but until you hit that 50K word mark, you just have to keep going. And that’s what I love. I love seeing the story take shape, I love figuring out what happens next, I love just letting the words flow without having to focus on anything but that.

It has been awhile since I’ve written anything new, other than short stories (which are good, too–I’m not negating the value of those). I really think I’m close to having this current novel in publishable shape, but part of being a successful writer is not putting all the eggs in one basket. I haven’t had anything else to pitch in quite awhile. I’ve been so devoted to this story that I haven’t put the same effort into any of my other manuscripts, and therefore haven’t had any chance to be successful in any other directions.

That needs to change. There is so much more inside of me, and so much more already written down that needs to be loved as much as I love my first novel, then sent out into the world. I’m getting to that point, slowly but surely, and NaNo is one step in the process. I have to have new things in order to revise them and set them free to be rejected, revised again, and eventually loved.

Wish me luck! And if you’re doing NaNo, add me as a writing buddy. My name is super creative–it’s my name. Avily Jerome. Look me up. 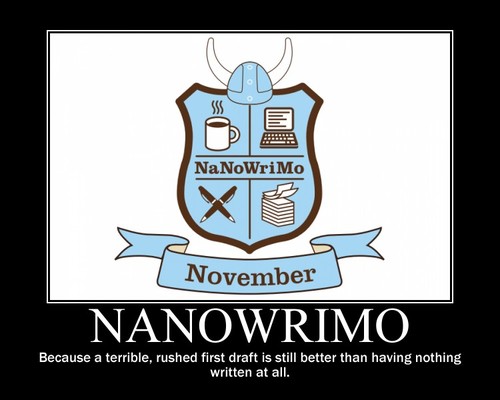