Posted by Avily Jerome on October 9, 2014 in Life and Such

There were several other families from my kids’ school who were all going together, so at the last minute, we tagged along. My husband is more of an indoor person, so doing something like this is pretty much all on me to get what we need and make it happen. We have a really nice tent and sleeping bags that my dad got us, so it was mainly a matter of packing it all and packing food and clothes for the weekend.

We left Friday after my husband got off work and drove a couple hours up into the mountains to meet the rest of the group at the campsite. It was dark by the time we got there, so a couple other dads helped us set up our tent in the dark while the kids ran around the campground hollering with their friends.

My oldest son has a fishing pole and tackle box that my dad had given him years ago that he never really used, but early the next morning he got up and went down to the creek with some of the other boys and went fishing. He baited the hook and did it all himself. He caught three or four fish that day. He even let his sister reel one in. 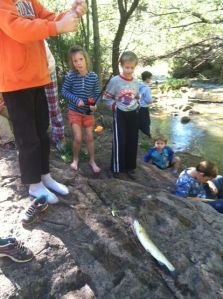 (The boy in the orange sweatshirt, the girl in the blue striped shirt reeling in the fish, the boy in the gray shirt next to the girl, and the toddler in the blue sweatshirt on the ground are mine. The others just happened to be in the same vicinity when I was taking the picture.)

(The view at one point on our hike) 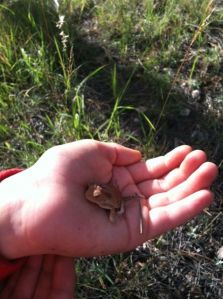 The kids ran around all day for two days, exploring and playing and using their imaginations. No one touched an electronic device for that whole time.

They fished and played in the creek 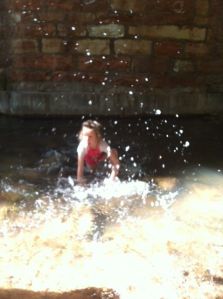 and played with their friends and ate s’mores

and fresh fish and just generally acted like wild things. 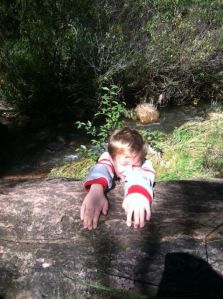 We live in the city, and in the summertime it’s so ridiculously hot that it’s nearly impossible to spend any time outside, so they don’t get the chance to do this often.

With all the stress of school and homework and chores and everything else that they deal with every day, it was really neat to be able to get away from it all for a couple days and let them act like children. It was neat to get to see them do things on their own and figure things out for themselves. It was neat to get to relax knowing they were having fun with their friends.

Bonus, we only lost a couple of them, and only for a little while at a time.

← Alphabet Blogging: E is for…
How can we evangelize in the 21st Century? →