Posted by Kristen Stieffel on December 27, 2013 in Our Faith

The decorations at our house finally went up December 22, and they won’t come down until January 6.

Culturally, “Christmas” starts the day after Halloween and ends as soon as the wrapping paper is dumped in the recycle bin.

Liturgically, Christmastide begins on December 26 and ends on January 6. In some circles the latter is called Three Kings Day or Twelfth Night or the Epiphany. It celebrates the visit of the Two or More Magi to the Christ child.

Now after Jesus was born in Bethlehem of Judea in the days of Herod the king, magi from the east arrived in Jerusalem, saying, “Where is He who has been born King of the Jews? For we saw His star in the east and have come to worship Him.”—Matthew 2:1-2 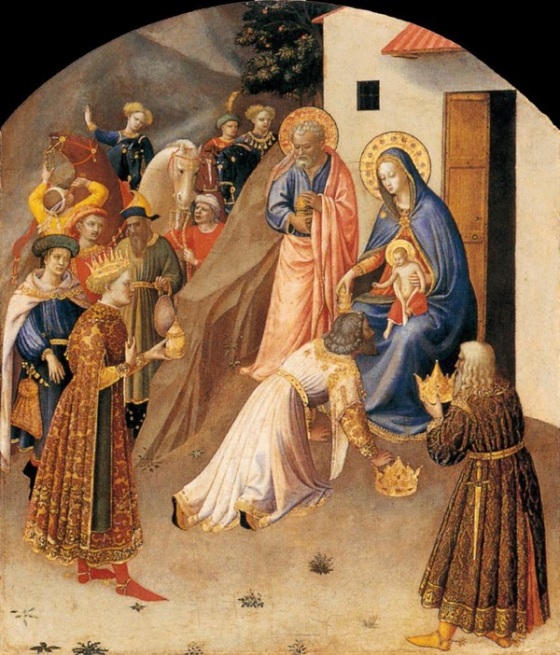 Adoration of the Magi by Fra Angelico, 1424

You may have heard the old saw about the song “The Twelve Days of Christmas” being a sort of catechism. It’s not. It’s actually more of a drinking song. But these are the twelve days: from December 26 to January 6, the Epiphany.

The one time of year we most need to slow down and appreciate the wonder of the incarnation is the one time we’re quick to box up the lights and nativity to make room for the New Year’s Eve buffet.

The Word became flesh, and dwelt among us.—John 1:14

This Christmastide, be still long enough to appreciate that glorious truth. And have a blessed new year.

← Book First, Then Movie
Preparing for the Future →

8 comments on “Christmas isn’t over”