Posted by Robynn Tolbert on October 17, 2012 in Author's Journey, Life and Such

Ever have one of those days when you’d rather take a nap than do the dishes? 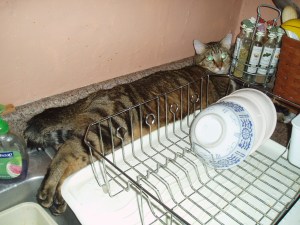 Seems for the past year, I’ve been doing nothing but taking naps. OK, I’ve played Farmville, too, but mostly, when I’m not at work, I’m napping. Or wishing I were napping while I do a dozen other things that have nothing to do with writing my next book.

Where did the energy go? I remember back in college bounding up and down stairs, certain I could take on anything and anybody at a moment’s notice. I ran instead of walked. I jumped over couches.

OK, I tried to jump over a couch – once – failed miserably (and publicly) and never tried again. But I did try it once.

I also wrote like a scholar. I started maybe ten books and plowed halfway through all of them before I lost interest and moved to the next project, while maintaining a 4.0 grade average carrying 18 hours per semester. Boundless energy and creativity back then. Alas, no follow-through or I’d now be a multiply-published author. Is that a word?

After college, I played with kids. I directed a junior high puppet team, for goodness’ sake, and I worked the puppets, too. I wasn’t jumping couches, but I kept up with those little yard apes and I moved better than half of them. I did that for twelve years. I even wrote some skits and such. I wrote Star of Justice during that time and a ton of what I now know is fan-fic. Nothing published, of course. Not my goal.

I’m not that old. Forty is the new twenty, right? I should be coming into my prime, not going to bed by nine. Although, I always went to bed by nine, even in college, so that’s not new.

I could say it’s that my life has become more hectic and less directed. In college, I had a plan: graduate. For puppets, I had a plan: survive without homicide. The writing just underlined the plan. It was something I did because I had the time and energy and it didn’t conflict with the plan.

Well, time and energy have been in short supply lately, and, frankly, I have no plan for the next ten years. I’m wandering around from event to event, and when I’m not wandering, I may as well be sleeping. That’s how it feels, anyway.

So here’s my not-New Year’s resolution: I’ll finish another book. I don’t know if that’s enough to keep me awake on a chilly Sunday afternoon, but I’ll find out. I happen to have a book that needs finishing, so that works.

For the moment, though, I have to go to bed. I’ll start tomorrow.

Born in Kansas and born again at age six, Robynn has published two novels and started her third. Robynn, aka Ranunculus Turtle, lives in Kansas with a clowder of cats, a patient dog and a garden.