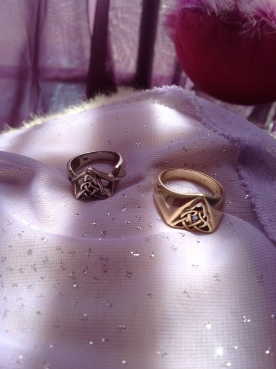 Our wedding rings I designed

Yesterday I and my Husband celebrated our 10 year Anniversary of being married. So I thought I’d share a bit about us.

Where? We met in a small “podunk” town in Idaho where both our parents decided to retire to the countryside. The town sprawled over a deep river canyon and the two pine-covered plateaus surrounding it. Nothing like watching for elk and deer when driving home after a late night date.

How he first caught my attention? I heard him playing piano – I’m a sucker for piano.

How I caught his? The long blonde hair was definitely a catch but he decided I was just a “pretty face” until he tried to scare me off with talk of his invention dreams… flying cars and light sabers, oh my. Needless to say I was intrigued by his ideas and he hasn’t been able to get rid of me since.

His family has a knack of the boys marrying older spouses. We’re no exception to that, but I’m only older by a matter of months. 😉

Our courtship lasted about 1.5 months, with a total of 4 dates and well over a hundred e-mails before we were officially engaged. During that time we exchanged well over 100 emails, most of fair or significant length. I was a 2 hour drive away, at college most of the time so it was largely a digital courtship.

How did he propose? He wrote a song for me, which he played and sang for me privately.

We were married 6 months from the day of our first conversation.

Let me tell you, in all the personality metrics I’ve seen, we are definitely not a recommended couple. Perhaps it works because we’re both a touch odd. He’s the people-oriented computer geek who loves teaching. I’m the laid back artist with a knack for playing psychiatrist.

It was only after we were married that he realized that I had a lot in common with personality types that he couldn’t understand and actually hated. You know, only after the point of no return.

It wasn’t just the personalities either. I’m the second of four kids, (plus 2 half sisters 10 years older). My Husband is the last of 9.

I’ve moved at least every five years and have lived all over the world with the Air Force. He was raised completely in the same city until his parents moved to the country to retire.

Oddly enough, many of the lessons we’d learned from life were similar. They drew us together and helped us understand each other in a way others didn’t seem to.  As an artist with a vivid imagination, I valued the dream of a wild scientist. We both knew the sorrow of criticism in relationships. We both loved theorizing and trying to understand motivations and personalities of others around us.

The diversity of our personalities have helped us legitimately explore the motivations of a variety of people, both real and fictional. He has helped me learn more about running a business and marketing. Meanwhile, I have helped his writing, critiquing and sarcasm. Somehow I think I got the better end of the deal.

In the end, we find a curious balance with him helping to keep my feet on the floor and I regularly talk him down from his emotional and mental ledges.

We know the Lord brought us together, and I could never imagine finding anyone in this world more precious to me. When I am distanced from him, I feel incomplete, even more lost than I would without my computer right when a brilliant idea strikes.

I am looking forward to many, many more anniversaries to share with him.

← Visions
It’s Heating Up Out There →

3 comments on “A Curious Courtship”