Three Reasons Why I Won’t Quit.

Posted by Tymothy Longoria on January 28, 2012 in Author's Journey, Our Faith 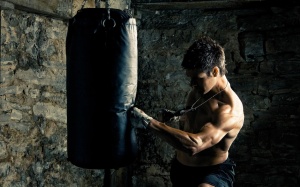 Put your gloves back on. It’s time to fight. We are on a path. We are on a journey. On this journey we are constantly being told that we cannot accomplish what we want. By our selves. By the enemy. By others. But…when we make a conscious decision to ignore those voices that say we won’t, we can prove to ourselves, and them, that we can.

This is left unsaid, but it bears repeating, again and again. God is first and foremost my Leader, my Teacher, My Guide and my Cheerleader. Truly. Most importantly though, He is my Example. He is the example of not giving up. In the Garden of Gethsemane, Christ asked for the task ahead to be removed from Him.

“Father, if you are willing, please take this cup of suffering away from me. Yet I want your will to be done, not mine.”–Luke 22:42

But instead, He wanted t0 obey. Instead He wanted the Father’s will to be accomplished. Now because of His mercy and His grace, we don’t have to suffer as He did. Because of it, we can do anything.

My family, and I’m more than sure that most of you can associate, has had its trials and tribulations in this lifetime. Generation after generation has struggled to accomplish their goals and their dreams. Some have. Some haven’t. I called back on the generations before me, from the Greeks and the Spaniards, and to the Yaqui before me and implored them, “No more! No more struggles! No more pain! No more fear! We have been redeemed. We have been set free. This is our time now!” In doing so, I believe His will is being done. The enemy will come and attempt to deceive us and try to drain us of our joy…but it won’t happen. For my family and those who came before me, I won’t quit.

There is a quote that says, “When I stand before God at the end of my life, I would hope that I would not have a single bit of talent left, and could say, ‘I used everything You gave me.”

It’s by Erma Bomback and of course, I agree. You see, I’m in it, to win it. This life thing. This dream thing. I hope to accomplish more than those who came before me. At the same time, I wish for those who come next to do more. That’s how it should be. In the end it is all to advance the kingdom of God. Truly. It is all to inspire others. To move others. To cause others to stand up and act. To act on what God has planned for them.  I read recently, “If you still do not know what your talent is, pray and ask God to show you.”

Indeed. I believe I’m at this point. He revealed to me what I’m to do, and so we move on.

“If the writing is honest it cannot be separated from the man who wrote it.— Tennessee Williams

When a few voices shout “You can’t,” there are a thousand shouting, “You can.”

Robert Frost said in Stopping By Woods On A Snowy Evening:

I can’t quit, now or ever…for I have promises to keep and miles to go…before I sleep.

Tymothy Longoria has been described as a writer with a flair for the dramatic (whether this is true still remains to be seen). He is a fan of all things fantastic, metal music, black t-shirts, and aligns himself with geeks, nerds, and all manner of monsters, and is an ardent, optimistic supporter of his fellow creatives. He has written several short stories for the online macabre zine Underneath The Juniper Tree and in 2012 was awarded Debut Author of the Year by Twisted Core Press for 'Envy', his contribution to the Seven Deadly Sins Anthology. He is currently editing his full-length dark fantasy retelling, Revenants: Book One of The Stories. Fairy tales? If only. Legends will be reborn. Tymothy calls Texas home, where he lives with his wife, two children, and a cat called ThunderCat aka Kitty PawKitty. He is represented by Bree Ogden of Red Sofa Literary.

2 comments on “Three Reasons Why I Won’t Quit.”