Posted by Diane Graham on September 14, 2011 in Life and Such, Our Faith 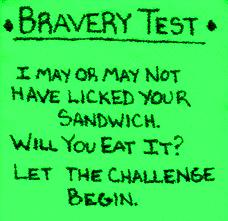 On the news last night, there was a story about an accident in which a motorcycle driver was trapped under a BMW. The car was on fire. Several people came to his aid by lifting the burning car off of him and pulling him to safety. You can watch the video HERE. When I watched this act of selflessness, I got a lump in my throat. Around a dozen men and women risked their own safety to try to save one man. One life is worth the risk of a dozen. Now, to some, this seems absurd.  To them, I say you obviously do not understand the crossroad of humanity where logic is defeated by compassion.

So what is bravery?

Here are a few favorite quotes on bravery:

“You can’t be brave if you’ve only had wonderful things happen to you.” Mary Tyler Moore

As a fiction writer, bravery is a key element in driving the story and giving my characters depth. Bravery can only come in a difficult situation, usually something life-altering or even life taking. It cannot be forced because bravery is a choice. It runs soul deep and is a a matter of morality, integrity and conviction.

I’ve also found it is a bit contagious. Think about it. How many of the people in that video do you think would have stepped forward on their own? I say one, maybe two. But as that first person moved, he sent a wave of bravery through the on-lookers and there was a call to act nobly. That is where the lump in my throat forms. That is the intersection of logic and compassion. And if you hadn’t noticed, compassion beats logic like rock breaks scissors…every time.

Do you need further proof? Let’s look at the prime example of logic and compare it to the prime example of compassion. Logically, I should burn in hell and so should all of you. I have sinned. I am far from perfect and the LAW demands perfection for eternal life. That nasty satan will try to convince you every day that you are unworthy of life. But then there is Jesus. He bravely died, defeated death and gave me and you a way to eternal life. That is the epitome of compassion. The kicker is our sin is against Him, and yet…mercy.

“These things I have spoken to you, that in Me you may have peace. In the world you have tribulation, but take courage; I have overcome the world.”

Peace, love, and God’s will.

Diane Graham lives in the mountains of eastern Oklahoma with her husband, children and many dogs. She is an avid reader and lover of all art forms that encapsulate imagination and goodness. Her debut novel I Am Ocilla was released in March 2012.

← Shame for Glory
How I Met Your Father, Part Six →