Posted by Rebecca Minor on September 4, 2011 in Life and Such, Our Faith, Random Things 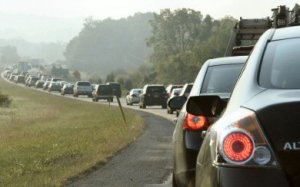 Having rejoined the workforce after eleven years of stay-at-home parenting has placed me right smack-dab in the middle of the throngs of folks commuting every day from my part of the universe to all points closer to Philadelphia. My drive to work is one of those that takes less than thirty minutes if you embark upon it midday, but anytime between seven a.m. and ten, it becomes more of an hour-long endeavor.

At first, I faced this extended commute with gritted teeth and a “necessary evil” sort of perspective. I lamented the time lost to writing, editing, dish-washing, sleeping, you name it. But then it occurred to me…starting one’s day off with an hour of fussing over what I wasn’t able to do with the time was a pretty defeatist thing to do.

I decided to commit as large a portion of my morning drive as possible to prayer. Prayer has been one area of my life to which I have always devoted insufficient time. And since I don’t really believe you have to close your eyes to pray properly, it’s still a reasonably safe thing for me to do in the car. (As safe as prayer ever is, anyway. Honestly, it’s a risky activity on many fronts, but I think that’s another post.)

The first day of this concerted effort to pray on the way to work was quite interesting. If I’m being completely honest, the reason I started praying that day was that I have been a bit of a nervous wreck since I started working, and I felt like I needed divine intervention not to crumble into an overwhelmed pile. My digestive system has let me know in no uncertain terms that it does not entirely approve of the line of work I’ve chosen. In way of explanation: I am an introvert who would one hundred to one rather write an email than pick up the phone, and I am neurotically phobic of not being an expert in an area where other people are in a position to judge my level of expertise. Well, don’t you know, the job I’ve taken is a phone job where I need to navigate a database that has a hundred and fifty page training manual. The technical end of things has never been my strong suit, and of course, the only way to actually become fluent in the use of said database is to get thrown in the water and swim. So I get to be on the phone using a tool in which I feel inept to deal with customers’ real-time needs. Thank the merciful Lord the vast majority of our customers are delightful, patient people.

So I flopped on my figurative face before the Lord and said, “If I’m going to survive this, I need to start every day with you, Lord. You’ve got me a captive audience in this car, so what should we talk about?” I was tempted to make a rattling list of all the things I was worried about, but I reined that in and chose to start with thanksgiving. But even that came out in a frantic string of half-formed thoughts. Should it be any surprise to me that pretty much the only thing the Lord had to say that first day was “Be still?”

It was a poignant lesson, and one the Lord interrupted me several times that morning to say. I’m obviously a stubborn student.

But as I assess this week in prayer, although some days were more successful than others, I’ve rediscovered God’s willingness to meet with us whenever we’ll drop in on him. So long as I keep my appointment with him each morning, he’ll be available to listen. Even if I forget to show up three days in a row, the day I do get it together and remember to “be still,” the Lord will be sitting there beside me with his coffee mug and a patient smile. (Sort of. It’s helping me to put a modern face on my little morning encounters, because one of my major struggles in my relationship with God is keeping him at arm’s length. Using this imagination he’s given me to make him more accessible is my exercise of late.)

So, as crazy as it probably sounds to all the other frowning drivers on route 422 east, I’m learning to be thankful for my stop-and-go commute. It’s just another tool the Lord has surprisingly employed in order to transform my life. In my case, he’s doing his remolding one car ride at a time.

Rebecca P Minor draws perspective from her pursuit of various art forms, including writing, drawing, and music (singing mostly, though there was a time when a trombone figured in.) A 1997 graduate from The University of the Arts in Philadelphia, Becky earned a BFA in animation. Since then, she has worked as a character animator, a freelance artist, an art teacher, and most importantly, a wife to her husband Scott and mother of three boys. She is in the process of republishing her current body of work. The first installment of The Windrider Saga, Divine Summons, is available as an ebook novella on Amazon. She also has short stories available under the umbrella of The Windrider Canticles.