Posted by Ren Black on February 4, 2011 in Random Things

(Yep, you heard right, Ren is doing a Book give-away! Details below!)

I stumbled upon Marcher Lord Press even before they released their first line-up and happily signed up for the newsletter. From the moment I saw the title and cover art for Hero, Second Class, I was interested. After reading the sample and blurb, I definitely wanted it.

Maybe it was the “world in which Heroes owe monthly dues and Villains are allowed only one eclipse per fiscal quarter.” Isn’t a hero… ahem… a Hero’s job hard enough without adding the insanity of bureaucratic red-tape?

Or maybe it was the excerpt that started with the picturesque cliché, “Once upon a Time, in a faraway kingdom, there lived an old man and his wife. They had no children, and the old man prayed everyday that he and his wife would have a son.” Followed promptly by, “This story has absolutely nothing to do with them.”

What can I say? I love comedy. I love Robin Williams, Red Skeleton, Victor Borge, Pixar, Don Knotts, It’s a Mad Mad Mad World, anime’s Ranma 1/2, Veggie Tales and tons of others.  I particularly love the older comedy, that you can trust to be both funny and clean… those just aren’t that common these days.

So when I finally secured my very own copy of Hero, Second Class and dived into it, I must say it not only meet my expectations, but also caught me a little by surprise…

Readers can easily find common ground with the young Cyrus, a small town lad with big dreams. Modern readers may find more in common with Cyrus than they would expect with things like communicator tokens that hint at cellular capacity, Standard Issue Apprentice-Level Climber Kits, government Opinion Poll Surveys and the Complete Guide to Heroics (well, complete in 20+ volumes). Apparently even Heroes in training have heavy textbooks.

Mix in an Arch-Villain with a vendetta against Cyrus’ mentor, a couple of standard-level Villains (who apparently come with their own theme music) and plenty of iconoclastic jokes.

Somehow as I kept reading, I couldn’t help but think of another, off-the-wall comedy…

Monty Python and the Holy Grail 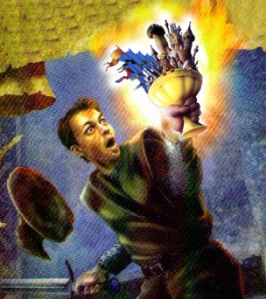 But can you really have a Christian Monty Python? They took nothing serious and mocked everything from cute little white bunnies and bloody gore, to chastity and God Himself…

In conclusion, I must say that all in all, apparently it can be done.  I think Bonds pulled it off quite well and even adds the dimension in artfully defying literary clichés and guidelines. Hasn’t it been said that if you’re going to break rules, do it with flair?

Blatant downloads and a string of flashbacks are as much for the humor as the functionality – probably more the first than latter actually.

Comedy can be a tricky path of timing and knowing your audience. When you have so many jokes and jabs, it’s tough to keep it fresh and alive. For the most part, I was pleasantly impressed by how well it all worked. I found only a couple spots that fell a little flat for me. I can think of two particularly but both of them were at transitional spots, one being a string of puns that just drug on a touch too long for it to seem natural to me.(Note: my Husband thoroughly enjoyed the puns, but he’s more of the punloving type!) However, in both instances I could see how it helped the flow of the storyline. Besides, I was having such fun all throughout that I didn’t mind.

I must also say that for much of the book I failed to appreciate the … ahem, power of Capital Letters and Arbitrary Numbers. They liberally dot the pages, sometimes at the oddest times. It wasn’t until Cyrus discussed such things with a more enlightened character that I began to understand. About 3/4th the way through the book, they spend three pages discussing the magical systems (this delay is mostly Reginald’s fault since he refuses to teach his apprentice anything about magic).

“Erm, some Dirt of Clodding? Hmm, I suppose so,” Halmer said. “But it would have to sound more grandiose,  and have more Capital Letters in order to be effective. It would need to be a Clod of Dirt of the Immortals or something like that.”

And that’s when it all made sense when I looked back. However, I should be grateful for Bonds to have finally enlightened me… Tolkien sure never got around to explaining it. 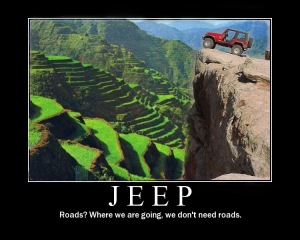 Okay, I admit it, knowing that it was primarily a roast, I wasn’t expecting a strong plotline or any truly dangerous and tense moments. I guess I’ve seen too many shows and my share of books that for all their hilarity and insane gallivanting, if you look too closely the plots are usually too fluffy, melodramatic or have plotholes big enough to feel like you’re driving an old beat-up jeep down Bagguio’s infamous rice terraces.

For instance, consider Monty Python and the Holy Grail. It jumps around hopelessly and don’t even get me started about how it ends! It was intentional. They made it to be unsatisfactory enough to drive you nuts. Add to that weak or non-existent villains.

Hero Second Class was completely different and unexpected. The villain is both diabolical and deadly. The deck is definitely stacked against Cyrus and his allies and Bonds does not protect him from the painful costs. He definitely have some tense action moments and tense emotional spots. There is sadness, romance, jealousy and betrayal of friendships.

But don’t just take my word for it, if you love comedy and action, check this book out – I seriously doubt you’ll regret it. Find it on Amazon or at Marcher Lord Press, or leave me a comment below to be entered in the drawing.

And, tomorrow morning, come check out the exclusive scoop of an interview with the true Hero of “Hero, 2nd Class”. Commenting there will also snag you an extra entry in the drawing!

But be warned, snorting coffee, choking on food, rolling on the floor and generally freaking out family and co-workers are standard hazards of bursting into laughter unexpectedly…

Interview With Cyrus, a real Hero!

DRAWING has been Closed and the book has reach the Winner! But, watch for more book give-aways here on NAF! After all, God encourages us to share, right? So here at NAF, we love to share great books!

← Year One at NAF
Interview with a Real Hero! →