Why we delay writing

Posted by Kristen Stieffel on January 21, 2011 in Author's Journey

Last month, Chris Hamilton, the blogger for the Florida Writers’ Association, asked, “So what’s with us? If we enjoy writing, why is it so hard to get started?”

And then here at NAF, Keven shared a numinous description of the joy we sometimes feel in writing. But for some of us, those moments are few and far between. I’ve talked with many writers who have difficulty sitting down and doing the work. 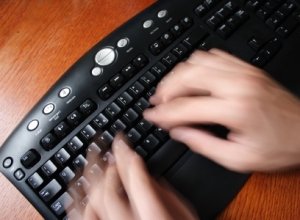 Why do we procrastinate on the thing we ostensibly love most? I usually blame life, in the form of bookkeeping, housekeeping, and keeping a day job.

Bryan Garner, in his Usage Tip of the Day e-mail, shared a quotation from C.S. Forester that sums things up more honestly:

“I find the actual writing a toilsome bore. The only way to get it done is to set your course for a given number of words every day. If tomorrow is just as good as today, then three weeks go by before you know it. You just have to go ahead each morning and get the miserable thing done.” C.S. Forester (as quoted in Harvey Breit, The Writer Observed 240 (1956)).

Forester, author of the Horatio Hornblower series, shares his writing method in The Hornblower Companion. It resonated with me because it’s like mine. He said it’s like setting actors up on a stage, running them through their scene, changing some things, running through again and again, differently each time, until it’s right. And then writing it down.

It’s easier and more enjoyable to picture the thing in one’s mind than to actually write it down. If only some cybernetic transcription machine could take the visions from our minds and digitize them for us.

Alas, we must pursue the toilsome bore of putting keystrokes together. In The Art of War for Writers, James Scott Bell advises setting weekly goals, rather than daily. That way, “if something comes up on one day that prevents you from writing your quota, you just make it up later in the week.”

I still struggle with this matter of getting the thing done, as there are so many other things that come up to prevent it. There is a great gap between knowing the solution is diligence and actually being diligent.

6 comments on “Why we delay writing”