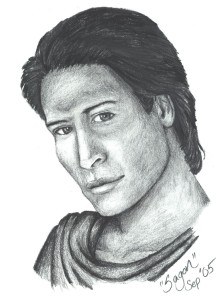 Okay, seriously, I know Sting isn’t likely to give me the time of day, let alone the right to use his song “Mad About You” for a character theme – or “Thousand Years” for that matter. But the first time I heard it, I knew it was a near-perfect match for Sagon. It was almost eerie. Still whenever I hear it, I can see the music video of clips roll through my brain.

I love music and so enjoy anything that intrigue me with a unique character/mood. I’m a sucker for soundtracks, Enya, Celtic, 80’s classics, Musicals and piano, but collect a variety. You’ll find Scottish bagpipes, Japanese anime, Hawaiian, Jazz, Mexican, New Age, Pure Moods, Swing, Bette Midler, Kenny Loggins, Loreena Mckennitt, Rod Stewart and a bunch of random current hits in my music. Some music is just fun to listen to, but I’m drawn to the ones that hint at a story of their own – just as Cole’s Song from Holland’s Opus. I especially love the songs that remind me of my character’s personalities and stories. Some of them:

Cat: Thousand Years by Sting, And so it Goes by Billy Joel, Track 6&7 of McLean’s Distant Serenade

Sagon: Viva La Vida, Mad about You by Sting, Let Me Be Your Armor by ?(can’t think of the group – it’s a pretty obscure one that a friend found for me)

Morlein: Because of You by Clarkston, Fairyland by ?(another obscure one the same friend found), Old Ways by McKennitt

Ash: I’ll Stand by You by the Pretenders, (sorry, no pic. Yet)

Perg: No Such thing by John Meyer  (have a pic somewhere but is temporarily misplaced)

Ziear: It’s Not Heavy by McLean (I like this one because it helps me feel the spiritual struggles of my characters – good inspiring song)

Granted, I must note that these are all fantasy characters thus some terms and references used (such as running through the hall of a highschool) are more figurative.

Whenever I sit down to write (when I’m not concerned with distracting others or competing with my children’s shows/music etc.) just about the first thing I do is turn that play list on. I have it on random so I never know which one will come on. But I like to sit and savor it sometimes – just trying to wrap myself in the characters and the moods of my stories. After a few minutes, then I’ll mix in some other music, particularly Enya or instrumentals.

So, even though we may never have the right to publicly link our characters to the songs, here’s to character songs! What songs remind you of your characters?

← Cars, brick walls, and learning to drive.
Perrier and Dragons →

4 comments on “My Private Character Playlist”