I’ve really enjoyed doing these featurettes on unpublished authors, if for nothing else but to really get to know the vast array of personalities found in the literary arts.  Most are quirky and eccentric to a point.  Some are shy and some are confident.  I have been following Robynn Tolbert’s blog for a little while, so I was well aware of her obsessive perfectionism and that she often struggled to control her impulses.  That’s fine… I can identify.

But when I contacted her about doing a feature for Star of Justice and gave her a list of some questions and material I would need to write my article, I got something I wasn’t quite expecting.  She made the statement on her blog:

“I am having the worst time figuring out what information to give [Keven Newsome] for my interview. You wouldn’t think someone as arrogant and self-absorbed as I am would have so much trouble talking about herself. I don’t here. But what exactly do I say about me and Star of Justice in a few paragraphs?”

Well, I think she figured it out.  When I checked my email and opened the attachment she had sent, I didn’t find answers to my questions… I found a complete and polished article, as if she had sat down and interviewed herself – leaving nothing to chance.

I laughed.  It was awesome and somehow I wasn’t surprised.  So after reading it over and realizing that my article writing skills paled in comparison to the amazing piece she wrote and that anything I wrote would equate to plagerism… I decided that I would just give you her article as is (I’ll add in more of my two cents at the end.)  So, without further ado… here is a wonderful article and interview with Robynn Tolbert about her debut novel Star of Justice… written by Robynn Tolbert.

Robynn Tolbert began her writing career as an illustrator at the tender age of five. Heavily influenced by her older brothers’ comic book collections and fantasy-heavy libraries, her own sketchbooks were mini-graphic novels of the worlds and characters she imagined. Those stories were brief, sometimes only a single picture with multiple word bubbles, but they were the beginning.

In college the story themes became more complex than a single picture could convey, so she shifted away from illustrating and focused on writing. The habit of showing only the most dramatic parts followed her, so it wasn’t until her thirty-first year and a summer of impending boredom that she completed a novel. Taking the advice of  the White King from Alice in Wonderland, she “began at the beginning, went on until she came to the end, and then stopped.” Star of Justice was born.

Robynn draws on her training in education and family therapy when writing books. She aims for realism in character reactions, even if the character is in an “unrealistic” situation.

“For example,” Robynn says, “Caissa has a photographic memory. Right now, science can’t prove or disprove such a thing, but if it were true, what kinds of problems would it create for a person? How could those problems lead to other problems or solutions to other problems? Answering those questions can propel a story in a new, interesting direction that rings true with the reader.”

Robynn wasn’t trying to preach a sermon when she wrote Star of Justice. Her goal was much simpler.

“I want to write good, solid fiction with a good, solid Biblical worldview. How would God interact with humans or other races on other planets? How would God reveal Himself to those races, and would humans be able to recognize Him? C.S. Lewis’ Narnia books had a big influence on me. I wanted to write something that might have a similar impact on today’s readers.”

“This is a fantasy tale of The Hero’s Quest, but it isn’t a typical Christian book about the one good guy who exemplifies Christ. This is a tale of the subtle workings of a divine yet personal Creator. Most of the characters are flawed, some deeply, yet God works with each of them to bring about His will. You won’t find overt conversions to Christianity in this book. These characters don’t even know Who Christ is yet. You will find a ‘God is always in control, even on another planet’ worldview.”

“This is Christian fantasy for readers who don’t normally read fantasy. Star of Justice is a sci-fi /fantasy crossover adventure mystery romance. I put in a bit of something for everyone.”

Star of Justice is currently awaiting review by Marcher Lord Press. In the meanwhile, Robynn is revising her second completed book, a stand-alone YA fantasy story called Elementals.

Will there be more stories of Caissa and company? 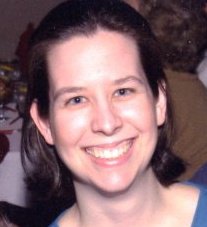 “Absolutely. I have a sequel in the works, as well as two prequels and what I jokingly call a ‘side-quel,’ which is a story that occurs simultaneously with Star of Justice but to different people.”

Robynn is a native of Kansas, where she lives with six cats, a dog and a garden. Family is important to her, and she regularly spends time with her brothers, mother, nieces and grandmothers. Robynn blogs daily at ranunculusturtle.blogspot.com and has an author’s website at www.robynntolbert.com.

Pretty good, right?  What she neglected to say in the piece was that Star of Justice was a semi-finalist in the Marcher Lord Select Premise Contest sponsored by Marcher Lord Press and that she is hopelessly addicted to Farmville. (I’m sure if you contact her on her website she’ll add you as a neighbor.)

Now, while I go nurse my writing inadequacies back to health so that I can prepare to write the next feature in this series, here’s a little taste of Star of Justice.

Caissa Ocren, scholar knight of Golor, lives on the magic-saturated planet of Ah’rahk. Now magic is vanishing, and no one, not even the powerful wizard Gamaliel of Golor, knows why.

Born a pig-herder’s daughter, Caissa’s life was miserable until the wizard Gamaliel plucked her from the mud and gave her access to the opportunity of a lifetime – knighthood as a Star of Justice. Her training revealed a mind sharper than her blade and an unquenchable thirst for knowledge.

When a routine assignment is interrupted by assassins, Caissa is too intrigued to be frightened. At first.

An ancient prophecy drops her into situations outside her experience: an unimagined world of magic-users, elemental spirits and dragon-worshippers. To follow the prophecy may result in her death; to ignore it will destroy Ah’rahk. Joined by a mercenary minstrel, a shape-shifting druid, and a legendary spirit warrior, Caissa seeks enough faith in Ehsu, the Son of the Creator, to ask for his help to save herself and her world.

A tankard tumbled through the air, catching the bowman in the face. Caissa dropped to the floor as the misfired bolt whizzed past her. She crawled under the last table standing and searched her blank mind for options.

The shaggy man had lived through his charge, because he crawled under the table beside her. “They seem to want you dead, sirra.” He licked slopped ale from his hand. He must have thrown the tankard.

“You bungling sons of she-goats!” a distant voice yelled. “Just kill her!”

She pursed her lips. “I may be wrong.”

The man grinned, a wild gleam in his pale eyes. “We’re pinned here. I think there’s only the two left.”

Caissa shook her head. “That shout sounded like it came from outside. I think there’s more than two.”

“Good enough reason to deal with these before the others join in.” The man nodded. “You go left, I go right, meet in the middle.”

The man rolled his eyes heavenward. “Then you should be able to think of something.”

Keven Newsome is an musician, theologian, and a bit of a nerd. He enjoys a variety of musical genres, from Christian rock to movie soundtracks to KPop. A former band director, he plays about a dozen instruments, given a couple of weeks to practice up. His theological work has included a book on multi-generational ministry and a thesis on the theology of communicating with the dead. As for his nerd-card, he enjoys the fandoms of The Legend of Zelda, Doctor Who, Avatar: The Last Airbender, and Lord of the Rings. With a music degree from William Carey University and a theology degree from the New Orleans Baptist Theological Seminary, Keven actively serves in ministry as both pastor and worship leader.